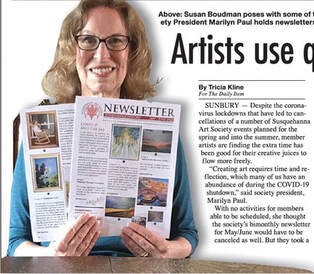 SUNBURY — Despite the coronavirus lockdowns that have led to cancellations of a number of Susquehanna Art Society events planned for the spring and into the summer, member artists are finding the extra time has been good for their creative juices to flow more freely.
“Creating art requires time and reflection, which many of us have an abundance of during the COVID-19 shutdown,” said society president, Marilyn Paul. With no activities for members able to be scheduled, she thought the society’s bimonthly newsletter for May/June would have to be canceled as well. But they took a different approach.  “Instead, we asked members to share what they were currently working on,” Paul said. “The result was the largest, most colorful newsletter we ever completed! It was wonderful to see everyone’s work and read their comments.”
As Paul wrote in the newsletter, “(Your contributions) reinforced my belief in the power of art in uncertain times. Art helps us connect, uplifts our spirits, provides an expressive outlet and opens our eyes to social issues.” 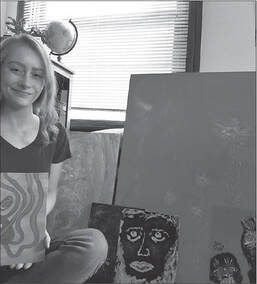 Alicia Wilver
​
​
​Alicia Wilver, of Sunbury, joined the art society in 2019. Her favorite kind of art is painting and photography. During her free time recently, she said, “I’ve been focusing more on broadening my horizons.” That has included exploring more with painting, especially larger scale pieces and acrylics. “It’s neat to see just how different each media can be,” she said.  “And creating bigger pieces isn’t as intimidating as I once thought.”


Susan Boudman, of Millville, is also a one-year member of the society. She said she’s been using her stay at home time “to do as much painting as I can,” and that her goal has been to have more work to feature in future shows. She has used social media art sites for painting challenges and support.
During the extra time she has been able to focus on her art, she said she has expanded her palette. “I thought landscapes were my passion,” she said, “but during this time of quarantine, I have been experimenting more with portraits and really enjoying it.” She has even been able to sell several of her paintings during quarantine, she said, and acquire a few commissions.
“I feel fortunate that during this time, I had something to occupy my free time that I thoroughly enjoy,” she said. “I love getting lost in my paintings. I love the point where I can see what started as a blank canvas, turn to an ugly phase, then finally evolve into my vision. I refound something that makes my heart happy!” 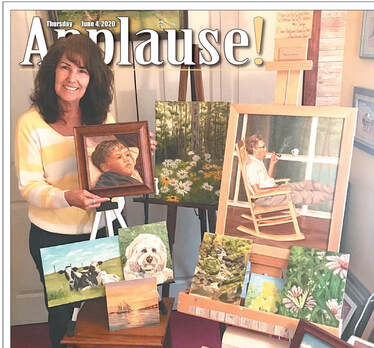 Susan Boudman
​Paul said the society’s members range from new artists to professionals, and “We still have active members who originally joined in 1979 when the group was founded.”
Paul joined the society in the 1990s, she said, “seeking the opportunity to exhibit my art and share experiences with local artists.” She has served on the board of directors for many years, and became president in 2019. After 32 years working in the Milton Area School District and raising a family, she said when her sons were in school she took a sabbatical leave to earn a master’s degree in studio art, when she “rediscovered printmaking.” Today, she creates hand-pulled prints on a printing press in her home studio — work that is inspired by nature, she said.
“Making the prints is a step-by-step, hands-on procedure that helps to pass the time during quarantine.”
She encourages artists of every level and medium to make the most of the shutdowns.
“With the gift of time, artists can experiment and explore their art more thoroughly,” she said. “Now is a great time to try something new or really focus on improving one aspect of one’s art.”
She said there are many resources online, including Google Arts and Culture virtual museum tours, and YouTube tutorials on various mediums and techniques. In addition, Susquehanna Art Society member Lina Ferrara, who teaches workshops for artists and classes at the Y Arts Center in Sunbury, has been offering free live oil painting instruction on Friday mornings on her “Lina Ferrara Art Studio” Facebook page.
Wilver said she has loved art since she was a child and describes herself as a lifelong “creature of creativity.” She has been learning to open up more and share her creations with others.
“More people want to create but don’t, due to fear of others not liking their art,” Wilver said. “I admit I was worried to share mine with peers, but don’t worry too much about that. Art is you, and what you feel and admire.”
It’s food for the soul during this time that depression and anxiety could easily sweep in. That’s why the art society continues to strive to keep a love for art alive in its members.
Paul said they were forced to postpone a March meeting in which artists were going to share their experiences on a recent plein air painting trip to Italy, as well as an April critique meeting. They also had to cancel a May exhibit at the Public Library for Union County, and have decided to cancel their annual Member’s Picnic and Art Auction that was to be held in July.
The board of directors also recently had to make “the difficult decision”, Paul said, to cancel the Annual Judged Art Show at the Degenstein Library, which was to be held in August. With so many unknowns about the future, they were unsure if the show’s large opening reception would allow for social distancing. However, Paul said, “The board of directors is exploring alternative ideas for the Annual Judged Art Show and our fall events that could keep our members engaged in art activities.”
The society is in its 41st year. Paul said the non-juried, nonprofit organization “offers its members support, camaraderie, and the opportunity to show their art.
“One of our main goals is to educate our members and the public about art,” Paul said.
The society boasts approximately 100 members who reside throughout the Susquehanna Valley and as far away as Maryland and Florida.
​_________________________________________________________________

Paintings, sculptures and pottery of all varieties and by all ages of artists, are now on display at the Degenstein Library for the Annual Judged Art Show, hosted by the Susquehanna Art Society.
According to Marilyn Paul, president of the society, there are 222 entries altogether. The winners were announced at an artists’ reception on Tuesday.

Paul, who was a high school art teacher for 32 years, said “It was a joy to see my students’ creativity grow from year to year. I see the same growth in our members.”

The art show gives opportunity to all ages and abilities of artists, separating categories into students 17 and under, beginner, intermediate, and advanced. If an artist wins an award in one of these categories, they are encouraged to move onto the next level the next time.

“I have seen firsthand the growth that our members make from show to show,” Paul said. “It is a testament to their hard work and talent.”

The largest number of entries are in the “advanced” level, she said, “so the caliber of the show remains high every year. Our advanced artists consistently impress with their beautiful works and varying perspectives.”
Sylvia Denger, of Watsontown, submitted two of her watercolor paintings in the show this year. She joined the society in 2014, the same year she began taking watercolor lessons at the YMCA Arts Center. Her instructor encouraged her to participate in the society art show, and she won an honorable mention.

“Art and the love of art are so satisfying and important to me,” she said.  So much so that she serves as a greeter for the show, a role in which she can “encourage people to look into each piece and appreciate the creativity, the work and the beauty,” she said.

Paul said the mission of the Susquehanna Art Society, a non-juried, non-profit organization, is to support and provide camaraderie and opportunity for artists to show their work, as well as to educate both members and the public about art.

The first art exhibition in the Valley by the Society was held in 1980. John Troxell, of Point Township, was involved with this first show, responsible for hanging the artwork when it arrived at the site, which that year was the lobby of the Selinsgrove Middle School.

“By putting together this first show,” he said, “we wanted to expose the work of the many talented artists who live in this area but had no venue to show their work to the greater community. The idea was also to help create a community of artists to encourage each other and promote art as a cultural activity.”

During his school years, Troxell was inspired and supported by his uncle, a designer, and later attended college for industrial design. He later rose to become the head of the design department at Wood-Mode. The company purchased work by the art society’s members to hang in their offices, and even commissioned local artists to paint historic buildings for their Christmas cards, Troxell said.  “The contact with the society helped me make those contacts and the annual shows helped to highlight potential new artists,” he said.

The society has also allowed Troxell to continue his personal journey as an artist, creating works in acrylic, watercolor, colored pencil, and photography. He has submitted some of his work for the art shows, he said, “when I felt I had something to enter”, and he also has helped to hang the artwork for nearly every annual show since that first one in 1980.

He continues to encourage the community to be involved in some way.  “I would encourage everyone who may have some interest in art to attend,” he said. “There is an amazing range of subject matter and styles on display.  For those who may be considering the creative process,” he added, “hopefully this will give them that extra boost to give it a try.”

While the Annual Judged Art Show is open to all Pennsylvania artists, the society does hold shows open only to the approximate 100 society members, such as a members only show scheduled at the Packwood House Museum in Lewisburg in November during Stroll Through the Arts, and one at the Public Library of Union County next May.

The Susquehanna Art Society was contacted by Erica L. Shames, publisher and founder of Susquehanna Life Magazine, to have an article included in their summer issue, 2019.  We happily accepted, and reporter, Stephanie Kalina-Metzger, began interviewing a number of our members for the article about SAS and our 40th Anniversary.  Erica selected art by our members to accompany the article.

You can read about it all here:

Congratulations to the following SAS members who had winning entries in the Lewisburg Arts Council Indoor Art Show held November 2019 at the Packwood House Museum:

The Susquehanna Art Society participated in the Lewisburg Arts Festival this year.  We had info tables, a new banner and red balloons set up in Hufnagle Park in downtown Lewisburg.  Our purpose was to promote the Susquehanna Art Society during its 40th Anniversary and support the Lewisburg Arts Council on it's 50th Anniversary.  Despite a constant wind that hampered our display possibilities (the tent had to be taken down and our papers and easels kept trying to blow away), we had a fun time!

Reba Rohrer set up her art supplies on Market Street ​and demonstrated a block letter design. She won the SAS apron for working on her art.  Congratulations, Reba!